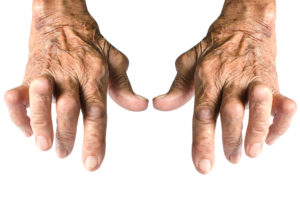 The general analgesic (pain reducing) effect of medical marijuana & arthritis is broadly known and described elsewhere, and that alone is a strong reason for patients with arthritis to consider medical marijuana when other pain-relieving medications have been unsuccessful. But, new research is beginning to show how and why medical marijuana can benefit patients in another way, by directly addressing the inflammation in the joints that leads to so much pain. Researchers have identified two receptors that interact with the cannabinoids in medical cannabis, one of which, called CB2, is found outside of the central nervous system. Another study shows that this receptor is found in the tissue of joints themselves, and that activation of CB2 has an anti-inflammatory effect. Still more research suggests that medical marijuana limits the damage of osteoarthritis and rheumatoid arthritis in humans, and direct application of CBD offers a potent anti-arthritic effect in mice, even when taken orally. For more information about arthritis, visit the Arthritis Foundation.